Did you know Westminster has its own butterfly nursery? It is located in the wooden planter boxes on the north side of the Windsor courtyard. 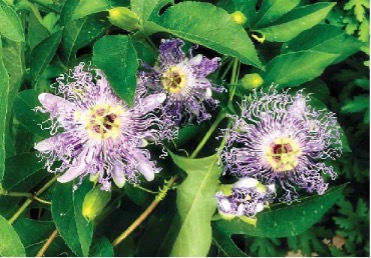 Passion vines are the favorite host plant for a species of butterfly known as the Gulf Fritillary (euptoieta claudia). Three of the planter boxes have a passion vine growing on elevated trellises and stakes. The nativepurple Texas passion vine (passiflora incarnata) has a beautiful flower. Those at Westminster began to bloom in May and continued into July. This nice cluster of blooms was photographed on June 8th.

The first signs of butterflies began in May. An occasional fritillary would visit the passion vines and make a brief stop to eat nectar from the flowers and lay eggs on the vines. This species of butterfly is notoriously wary and hard to approach. One did stop long enough on June 25th to have its photo taken while depositing an egg. 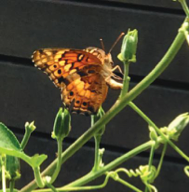 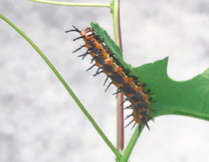 Caterpillars first began to appear around the middle of June; daily counts of 15 – 20 were soon noted. Gulf Fritillary caterpillars are reddish orange with black spikes and lines; some have white spots. Pictured is one eating a passion vine leaf on June 21st.

A pair of butterflies flying in erratic tight circles usually indicates a prelude to mating. This was a common scene during July. Here are two who landed to mate on July 18th. The male, a brighter orange color, hovers over the landed female. 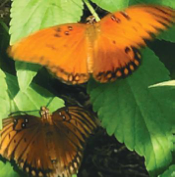 By mid-July the passion vines were covered with caterpillars, peaking at a counted total of 138 on July 20th. Soon new butterflies began emerging from
the chrysalises, usually in midmorning. Pictured left is one clinging to the spent chrysalis, waiting for its wings to dry in a process taking around one hour.

July 22nd was a warm sunny day and many newly-emerged butterflies were seen around the planter boxes between 10 and 11a.m. They soon move away from their nursery in search of food elsewhere. The end of the first annual butterfly life cycle comes in late July when all of the leaves are eaten from the passion vines, leaving no food for new caterpillars. Pictured right on July 22nd some twenty stragglers can be seen feeding on the vine stems themselves as no more leaves are present. An ovoid green passion vine fruit called a maypop can be seen in the lower right. The cycle should repeat in the fall after the passion vines have re-leafed. 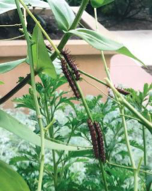 What’s Westminster’s all about?

We’re committed to doing everything we can to make our senior living community the best it can possibly be.

Fill out the form below, and a member of our team will reach out to assist you.